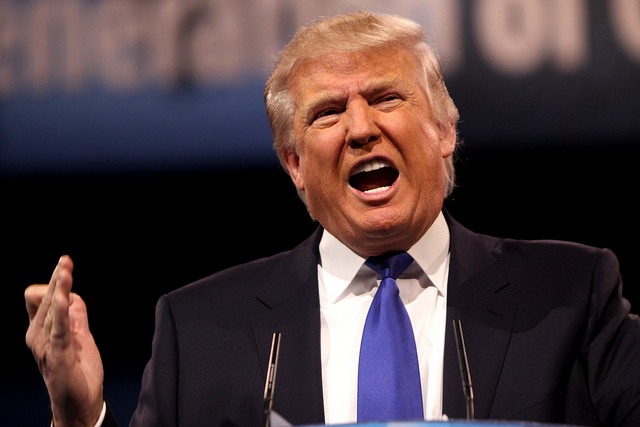 Love him or hate him, nobody can deny that Donald Trump’s rise to political prominence has been none short of meteoric. In just a few short months, he went from an often-mocked fringe candidate to the front-runner of the GOP who appears to have a serious shot at the Republican nomination.

It’s also undeniable that Trump doesn’t look like your average presidential candidate. For one, he’s not a politician. But even more striking than his lack of political experience is his distinctly undiplomatic demeanor: he is brash, crass, and notoriously unafraid to offend.

Whereas most politicians’ speech is marked by relatively advanced vocabulary, such as Hillary Clinton describing women as “untapped reservoirs” of talent, even Trump’s most impassioned diatribes rarely include words consisting of over three syllables.

One might think that Trump’s sometimes comically reductive language (one study shows that the language he uses in speeches is at a third-grade reading level) might hurt his credibility. Perhaps paradoxically, however, his tendency to err on the side of conversational rather than diplomatic seems to be profoundly resonant to his ever-enthusiastic fanbase.

Are your English skills more advanced than Donald Trump’s? Find out by taking a free English level test!

But what exactly is Trump doing that makes his language so effective? As it turns out, there are several prominent and identifiable rhetorical strategies that Trump (and his team) are using to appeal to a wide following. Here are some of the most notable ones.

There’s no doubt that Trump, a graduate of the Wharton School and author of multiple New York Times bestsellers, is capable of articulating difficult concepts in syntactically complex sentences. But you might not be able to tell judging by his presence on social media and in presidential debates. Indeed, most of his sentences are exceedingly simple in terms of their structure, often times consisting of just a few words. Here are a few examples, taken from various speeches and ads:

He’ll quickly cut the head off of ISIS.

Our country could be doing much better.

We have too much to get done.

We will make America great again!

This propensity for bare-bones, no-frills syntax is an effective communicative strategy for several reasons. First, especially for those who are disheartened by politicians’ reputation as silver-tongued double-crossers, Trump’s blunt straightforwardness may seem like a breath of fresh air. Further, psycholinguistics studies on advertising have shown that people are more likely to remember advertisements that are syntactically simple compared to ones that involve more complicated sentence structures. This could be one of the reasons why Trump’s viral TV ad has proven to be so memorable.

In linguistics, a discourse marker is a word or phrase like “so” or “I mean” whose function is to organize a sentence into segments. They’re closely related to fillers, words like “um” and “y’know” whose purpose is, essentially, to fill pauses.

Trump’s speech is littered with fillers and discourse markers. In just the first 20 seconds of Trump’s speech at a South Carolina campaign rally (in which, incidentally, he praises his own prowess in verbal expression), he uses “now,” “y’know,” and “well,” among others later on in the speech.

Now, y’know, you might think that, like, using too many fillers makes you sound, uh, uneducated. But research shows that this turns out not to be the case—au contraire, in fact. A study conducted at the University of Michigan found that telemarketers were more successful when they used fillers like “um” and “uh” compared to when their speech contained no fillers at all. The researchers concluded that using fillers more accurately reflects how people actually talk, and thus causes speech to sound more conversational and personal.

Therefore, Trump’s use of fillers and discourse markers serves to make his speech sound more natural, unlike the meticulously planned speech that’s characteristic of politicians—which so often can come off as overly scripted or robotic.

Conventional guidelines for style caution against overusing adverbs. This philosophy is summed up in Dead Poets Society, in which using adverbs is condemned as being “lazy”:

A man is not very tired; he is exhausted. Don’t use very sad; use morose. Language was invented for one reason, boys—to woo women—and, in that endeavor, laziness will not do.

Trump, however, seems to be wooing his audience perfectly well despite his substantial reliance on adverbs. Just a cursory glance of his Twitter yields several instances of the word “very”:

And a recently released Facebook video lambasting Megyn Kelly manages to squeeze in two instances of the word “really” despite consisting of a mere three sentences.

Does Trump’s frequent use of adverbs reflect a lack of imagination in his vocabulary? Perhaps—but more importantly, it reflects how people really talk in conversation. Like his use of discourse markers and fillers, this makes him seem like an actual human being, rather than a pre-programmed politician.

4. He loves insulting people (and particularly, calling them “losers”).

Surely the most notorious, distinguishable aspect of Trump’s is his shameless name-calling. His insults have really run the gamut, from calling Tim O’Brien “dumb” to slamming Lindsey Graham as a “lightweight” to condemning Jeb Bush as “weak.” In fact, he’s even ventured so far as to use swear words to criticize his opponents, recently implying that he thinks Megyn Kelly is a “bimbo” (just in case his feelings about Ms. Kelly were unclear).

Though one could make a case that such remarks represent a flagrant lack of professionalism—which are especially unbecoming for a presidential candidate—psychological research shows that these insults might actually be beneficial to Trump, in that they build a sense of group membership among his followers. Specifically, studies have shown that swearing bolsters a sense of group belonging, establishing trust and solidarity—which suggests that there might be a bit more to Trump’s name-calling than simple hot-headedness or immaturity.

Indeed, Trump is no stranger to controversy, and continues to be one of the most divisive figures in the political scene. Whether you’re delighted by his no-BS attitude, horrified by his polemical proposals, or just trying to get his official theme song out of your head, you’ve got to admit that he’s done a [surprisingly] stellar job at rallying his fans. And his use of the English language, from his unique simplicity to his penchant for calling everyone “losers,” is no small part of that. While his plans to “Make America Great Again” may seem dubious (or outright horrifying) to some, there’s certainly no doubt that his language has struck a chord with the American public.