10 Words Shakespeare Invented Which We Still Use Today

The life and times of famed playwright William Shakespeare may have been at their peak during the 16th century. Yet, his influence on the English language has extended far beyond that time period and straight into our modern age.

Most likely you were subjected to reading Shakespeare as part of your high-school curriculum, and undoubtedly associate the great bard with more than a few good puns and phrases. But you may not be aware that Shakespeare is in fact responsible for some of our most used language.

So, read on to discover ten words Shakespear invented that we still use today!

From: Timon of Athens, ACT V, SCENE I

Although ‘villain’ was already part of the English language, Shakespeare added the prefix ‘arch’ to make this word bigger and badder than before – bringing a whole new level to the word ‘villain’ in the process.

From: The Taming of the Shrew, ACT IV, SCENE V

The next time you’re busy bedazzling your favorite jeans with an inordinate amount of rhinestones, be sure to thank Shakespeare for the word he invented!

From: As You Like It, ACT II, SCENE VII

Shakespeare invented this word to use it in the following phrase: ‘eventful history,’ but you could probably use it for your busy day-to-day life as well, couldn’t you?

You’ve probably heard the term ‘cold-blooded killer’, but you probably didn’t know that it was a word Shakespeare invented! He used ‘cold-blooded’ to indicate someone who lacks emotion. 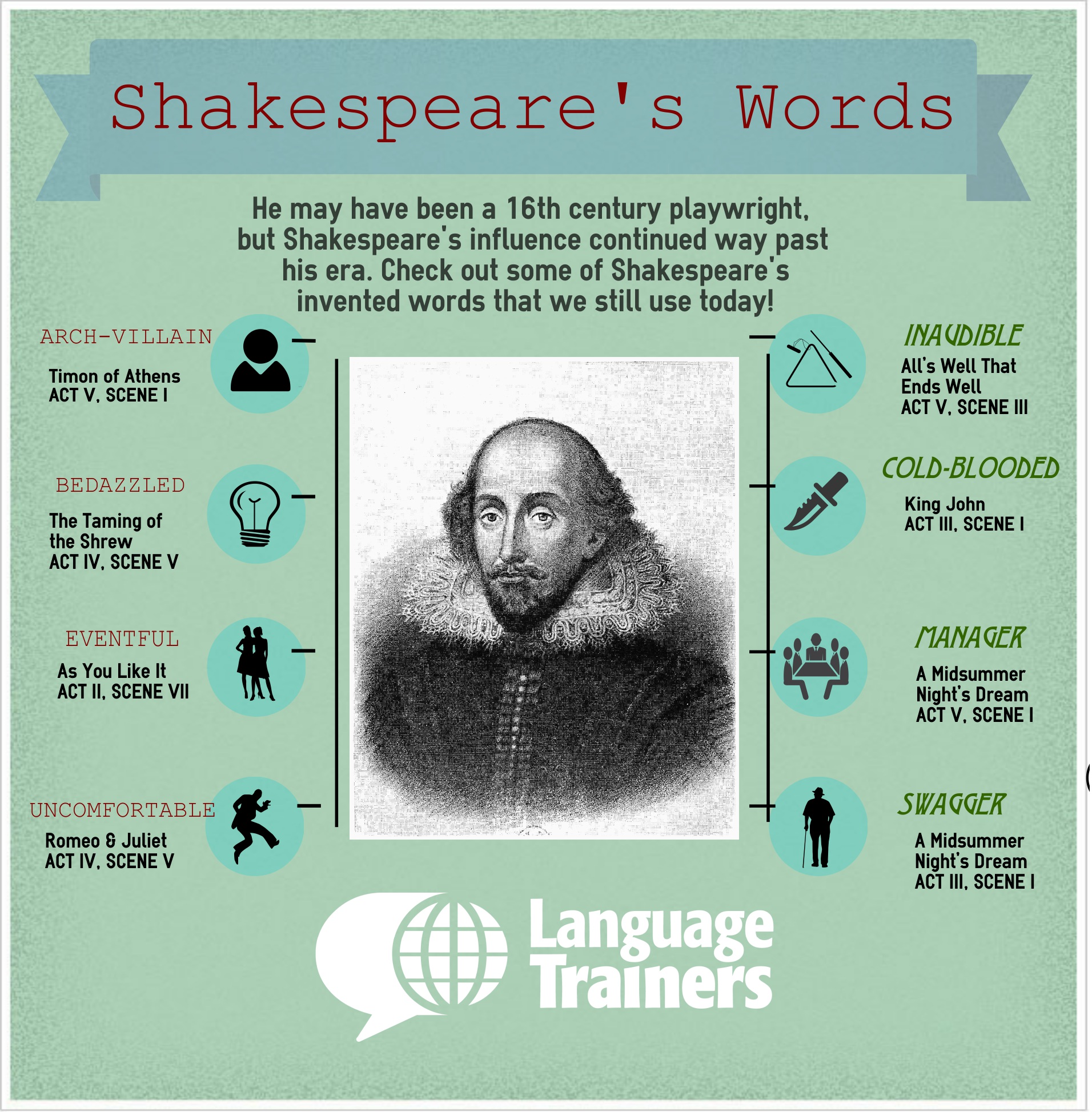 One of Shakespeare’s favorite tricks to pen new words was to simply add a prefix onto already existing ones. Here he added a negative prefix to the word ‘audible’ and voila ‘inaudible’ was born!

From: A Midsummer Night’s Dream, ACT V, SCENE I

Ever stood around the water cooler gossiping about your manager? Well, if it weren’t for Shakespeare your standard workday conversations just wouldn’t be the same.

That’s right. All those celebrity figures who claim to have ‘swag’ really owe it to a 16th-century poet. I guess this is proof that poetry isn’t really dead!

Yet another example of Shakespeare’s liberal and creative use of prefixes. Who would have thought that by simply adding ‘un’ to the front of an already existing word he would change the English language forever?

From: Measure for Measure, ACT I, SCENE I

All those bus, plane, and taxi signs warning passengers to ‘take all your belongings with you’ would be worded oh-so-differently if Shakespeare hadn’t had a sudden spurt of creativity.

From: Macbeth, ACT I, SCENE VII

Although the word ‘assassin’ did exist prior to Shakespeare’s foray into penning plays, it wasn’t until the English writer started fiddling with it that we were gifted another term for the word ‘murder.’

Thanks to Shakespeare, the English language has been significantly altered. However, ever since the first remnants of spoken language appeared somewhere around 50,000 years ago, languages have diverged into various veins which have since evolved into the 6,500 languages we have today.

Hence, why it’s so important to keep up with the modern world’s community of languages. Study English and its evolution or learn new languages and uncover the thousands of ways in which tongues from around the globe change. Give yourself a firm foundation by signing up for some excellent language classes and enjoy testing your new skills with free online placement tests. Before you know it, you’ll be more than ready to tackle so much more than just the wonderful world of Shakespeare!

Comments on 10 Words Shakespeare Invented Which We Still Use Today