The United Accents of America: A Guide to American Accents

Very often, foreign students ask their English teachers whether they have an American or a British accent. But what does it even mean to have an American accent? After all, the US is a very diverse country full of fascinating contrasts.

Isn’t a “Valley girl” as American as a man from an r-less city like Boston? Isn’t the accent of a cowboy from Texas as worthy of study as the more standard pronunciation of a news broadcaster from New York?

If you’re going to the US for business or leisure, knowing about these accents will help you know what to expect and improve your listening skills!

So, today, we are going to dive into the most distinctive American accents we will explain how you can recognize them.

Until the last century, the Midwestern accent used to be quite homogenous throughout the region. Today, however, if somebody tells you that they have a Midwestern accent, you could imagine many different voices in your head. There’s the husky accent of Chicago, the shifting voices of the Midland, and the long o’s of Minnesoooota, to name a few.

Let’s start, then, with a map which shows where you can find all these accents.

As you can see, even within regional accents, it is easy to find many variations. Let’s explore what makes each version of the Midwestern accent different from the others.

Like most people, speakers of Midland American English often claim they don’t have an accent at all. Though it’s true that, of all American accents this is the closest to a “standard” version, it is also rapidly changing.

Where can you find this accent? In places like Nebraska, Kansas, Iowa, Oklahoma, Missouri, Indiana, Ohio, and some areas of Illinois.

Its characteristics may be difficult to detect at first, but once you notice them, you can’t unhear them. This area is famous for the merging of pairs of words such as “cot” and “caught” which is now spreading all across the nation.

Also, in Midland American, some vowels are pronounced with the tongue closer to the front of the mouth than in any other region.

Another characteristic of this accent is that it loves to pronounce all the r’s. Actually, Midland Americans love this sound so much that they add it in words where you wouldn’t expect them, as in warsh instead of “wash.”

Watch the video below to see this accent in action!

This accent can be found in western New York and the cities and town surrounding the Great Lakes.

One of its most salient characteristics is the way people pronounce the vowel in “bat” high up in the mouth so that it sounds almost like the one in “bet.” On the other hand, the vowel in “dress” is articulated at the back of the mouth making this word sound almost the same as “druss.” This vowel shift is what sets Inland Northern American apart from other American accents.

Do you wanna hear how it sounds? Then listen to this interview with the legendary Lily Tomlin.

Although this is the accent of Wisconsin, the Dakotas, and Minnesota, it is more frequently associated with the latter. Like with most American accents, the most salient marker of this variety is the way people say their vowels.

Take diphthongs, for example. If you go to Minnesota, you will soon notice that the vowels in “late” and “coat” are articulated as monophthongs, so they sound almost like “let” and “caught.” Other vowel shifts involve a rising in the mouth, for example, the one in “cattle” sounds more like “kettle.”

Are you looking for an example of this American accent? Then listen to former Governor of Alaska Sarah Palin (yes, due to a migration wave in the 1930s, many people in southern Alaska speak like Minnesotans).

Whether they’re right or wrong, everyone has a notion of what a Southern accent is like. But what and where is “the South,” exactly? Though it’s very difficult to talk about regional boundaries, an accepted way of defining the “linguistic South,” comes from analyzing how different regions say the pin-pen pair.

The “merging” of these two words, though it might seem a minor aspect of a community’s linguistic identity, is very useful to delimit the South, where both words sound like “pin.” 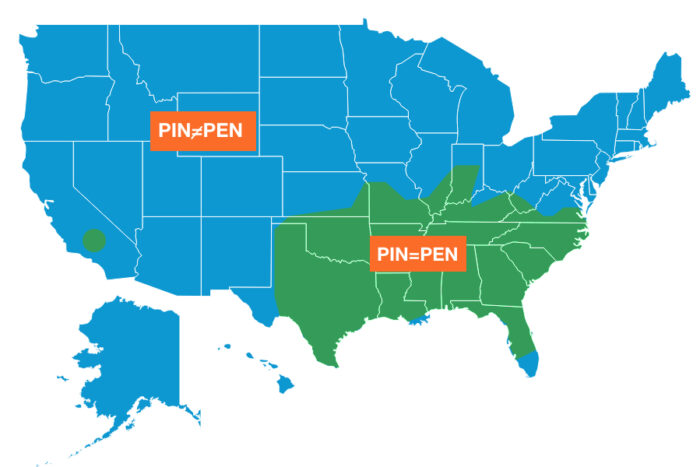 Although there are some regional differences within the South, SAE has quite a cohesive sound, based on the following characteristics:

The Drawl: The typical (sometimes stereotypically represented) Southern drawl is a result of the lengthening of the vowels. Think Sean Penn in the infamous All the King’s Men. Southern people have a way of turning their vowels into diphthongs, making “here” sound like hee-yur or “red” sound like ray-ehd.

The “I” Sound: Sometimes, when somebody from Texas says Hi, it might sound like “Hah.” What’s more, they might even say things like “mah bahk” instead of “my bike.” This means that, although SAE tends to monophthongize vowels, there is one that diphthongized: the I.

A salient feature among many Southerners is that they stress words differently. “Guitar” and “police”, for example, which are usually stressed on the second syllable, sound like “GUItar” and “POHlice” in SAE.

Despite all the negative representation in media, SAE is slowly rising. After all, Southern American accents have always played an essential part in defining American culture. As cities like Nashville and Atlanta gain popularity, so does their language.

In this video, Reese Witherspoon, who was born in New Orleans, teaches you some Southern slang.

Dialects of the East Coast Cities

Due to their visibility, city accents have a huge impact on the sound of America. In this section, we will cover Boston and New York, which have been strongly influenced by the British.

Why is that? Because people from southern England moved to these areas bringing their “r”-less pronunciation with them. This fact alone explains some of the reasons why these accents are so distinct, but let’s delve into them a bit deeper.

The most noticeable aspect of the Boston accent is, undoubtedly, the lack of “r”s. The problem is that people who make fun of this accent usually omit too many of them. As it happens, this sound is only dropped before a pause or when followed by a consonant.

“I cahn’t pahk the cah in this yahd” is an exaggeration, as the word “car” should be pronounced when followed by a vowel. Also, how many r’s each speaker loses will depend on how thick their accent is.

But putting on a Boston accent is not only about dropping the right number of r’s. You also need to study how the vowels work. Take the word “torn,” for example. On the one hand, you have to omit the r’, but you also have to make the vowel sound nasal and articulate it at a higher point in your mouth, so the resulting sound is something like “tahn”. Similarly, “for” becomes “fah,” “four” becomes “FOHwuh”, and “father” becomes “FATHuh.”

Before we move on to New York English, have fun with this satire about Boston accents.

This accent can be found throughout New York as well as in areas of New Jersey and Long Island. According to the renowned American linguist William Labov, the New York accent is often perceived as the “most American” as it’s the one that appears all the time in popular culture.

Like it happens in Boston, New Yorkers tend to drop their r’s and change the quality of vowels. That’s why speakers with a thick New York accent will say “cawfee” instead of coffee and “foist” instead of “first.”

Another salient characteristic is the pronunciation of “-ng.” Where speakers of most American accents tend to drop the “g” sound, New Yorkers tend to do a hard “g” at the end of the words. A clear example of this is the way they say “Long Island,” which sometimes sounds like “Lan Guy Land.”

Enough accents for today? Don’t worry, we’re almost finished. But before you leave, more about the New York accent with this video:

As you can see, American accents are just as rich and varied as American culture. Though this article only covers a few of the most prominent varieties, there are probably as many ways of speaking as people who live in the country.

Do you want to learn more about the differences between different American accents? Do you like learning by analyzing real pieces of discourse and doing lots of speaking? Then, send us a message now and we’ll pair you up with a fully qualified American teacher who’ll be delighted to guide you through your learning process.

Whether you try a one-to-one course or go for group lessons, our tailor-made lesson plans will help you achieve fluency much faster than traditional courses based on old-fashioned materials.

Comments on The United Accents of America: A Guide to American Accents MLKJ Day: Do You Have a Dream? Read more
See more articles about English