What “Future” is Featured in Your Language

You may or may not be familiar with this video that surely your language-geek friends have all posted and challenged. For those of you who made need a refresher or maybe actually want to see it, check it out here because it’s relevant to this article:

As you saw by the video, Mr. Keith Chen along with his colleagues at Yale are researching the way a language creates a distinction in how a culture perceives time. Mr. Chen takes it a step further and  hypothesizes that how a language uses the future tense can directly affect a culture’s propensity to save. In other words, if the future is perceived as similar to the present, your ability to save will increase because it’s something that is occurring now as opposed to happening in the distant future. The hypothesis then explains why languages that have a differentiated future tense may be referred to as a ¨futured¨ language, while a language that can interchange the tenses and time variables, essentially lacking grammatical division of time, is called  a  ¨futureless¨ language. 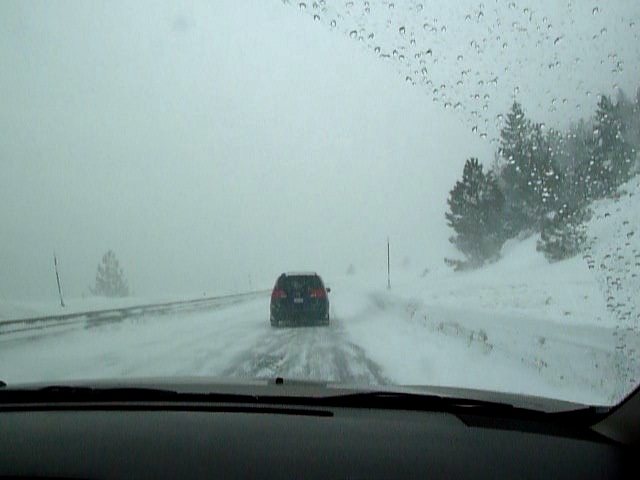 Look at this picture as it can be described:

Assume the personal pronoun is “it”, referring to the sky and what is happening presently. What do we say?

It is snowing; It snows.

Now imagine this photo was taken (yesterday). How would you refer to that?

What about if we know that it will happen in the future (tomorrow)?

If you really look into the details of the fabric that makes up English, you can see, quite blatantly, how the language visibly indicates time, using context-indicators and auxiliary verbs. With the presence of such details, that makes English “futured” language, meaning that the future tense is figuratively removed from the present and placed into a time slot in the future.

Do you remember that line that yourEnglish teacher used to draw?

Going back to what was said at the beginning, there are “futured” and “futureless” languages. In Keith’s talk, he mentions how Mandarin is a “futureless” language. Skipping through the above exercise with snow, instead of time indicators being so evident, the fact that “snow” has occurred, is occurring, or will occur is embedded purely into context. Imagine learning Spanish without all those pesky bazillions of tenses and just tacking time indicators to the infinitives: Yo nadar ayer; Yo comer mañana; Yo ser abogado, etc. Essentially, “it snow today, it snow yesterday, it snow tomorrow.”

Suddenly, that line your teacher drew on the board is no longer relevant. There are no more drastic divisions for each tense since it is not grammatically necessary in Mandarin.
*Please note that you must conjugate verbs in Spanish. Infinitives are not accepted!*

Another example of a “futureless” language is German since it would not be grammatically incorrect to say  “It snow tomorrow” which also has a strikingly similar sentence structure to Mandarin Chinese.  Although German is a close cousin of English, English is the only language within the branch of Germanic languages that requires the drastic separation between the tenses. Other languages that are “futureless” include Japanese and Finnish because they fall under the same category of Mandarin and German where the the future and present are closely linked. On the other hand, examples of “futured” languages would be Spanish and French where, like English, the future  is viewed as time away from the present.

Now the million-dollar question (pun intended): how can the usage of the future tense affect a society?

Metaphors are always the answer:

An English speaker wants to go to an outdoor concert. S/he checks the weather and sees that there is a possible thunderstorm looming in the distance, prospectively of course.

Metaphorically, a German speaker wants to go to the exact same outdoor concert, checks the weather, and sees the forecast.

Instilled in the “futureless” language is a lack of understanding of time and without a time indicator, that German speaker might just stay home for it could be raining presently or in the future.

With the English speaker, the “futured” indicated tense merely serves as a looming cloud (another pun intended) and come hell or high water, he will hold out hope and rock on for his life.

That’s what the main difference comes down to: hope and whether we, as the speaker(s), feel closer or farther away from it.

Just the same goes for how the perceived future of a language can affect one’s ability to save. For a “futureless” language speaker you make sure that for whatever monetary situation you come across you are adequately prepared, whereas a “futured” language speaker would have to remind themselves to save until that impending day.

Time will tell (on a roll!) how much more research will be discovered on how the construct of a future in a language can affect our economic success. As for now, consider the language you want to learn and that will determine your outlook on the future.

Comments on What “Future” is Featured in Your Language