The Secret Origins of English Grammar

Anyone who has taken a middle school English class is surely aware of the numerous grammar rules that haunted the pages of our notebooks:

But as strongly as these rules were ingrained into our impressionable young minds, have you ever stopped to think where they come from? Are these rules natural parts of the English language, or are they merely the whimsical fantasies of the grammar elitists of yesteryear? As you’ll see, the latter tends to be the case.

If you’re a self-proclaimed “grammar snob,” brace yourself, ‘cause this is gonna be a rough ride. Below, we’ll take a look at the surprising origins of some widespread rules of English grammar, and we’ll see that the English tests that plagued us so in 8th grade may not have been worth the trouble, after all.

Interested in English? Check out our English Classes in Chicago.

1. Never end a sentence in a preposition

A quote of unknown origin (though often attributed to Winston Churchill) aptly sums up the naggingly persistent rule that we shouldn’t end sentences in prepositions: “This is the sort of bloody non-sense up with which I will not put.”

The sheer absurdity of this quote shows that ending a sentence in a preposition isn’t just acceptable; it’s sometimes necessary, especially when using phrasal verbs. Though some languages, such as Spanish, actually prohibit ending sentences with prepositions, there’s simply no reason for the rule to exist in English. In fact, it was invented by 17th-century essayist John Dryden only to prove that his writing was superior to that of other writers.

In his 1672 piece “Defence of the Epilogue,” Dryden describes “the Preposition in the end of the sentence” as a “common fault” of other writers, but does not provide any rationale as to why it’s wrong to do it. In other words, he just invented a rule out of thin air to throw shade at his peers–not super classy, Dryden. Unfortunately, the rule stuck, and is still propagated in English classrooms all over the world today.

Unfortunately, given that Latin and English are different languages, this makes no sense. In fact, English and Latin aren’t even in the same language family, Germanic and Romance, respectively, which just adds to the frivolity of it all.

In Latin, infinitives are represented by a single word (e.g., cantare is “to sing”) that can’t be split up; because of this, grammarians like Henry Alford decided that English infinitives, too, should be inseparable.

Luckily, nobody really listened to Mr. Alford, which ended up being good for Star Trek, because “to go boldly where no man has gone before” just doesn’t have the same ring to it. It seems that the only people who follow this rule nowadays are staunch traditionalists and some English teachers, so I advise you to fearlessly disobeythem and split infinitives with abandon. 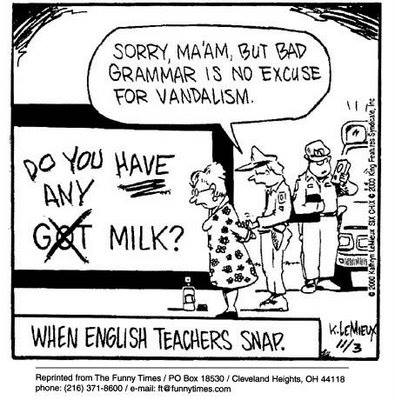 In fact, double negatives were common in spoken English before Robert Lowth, considered by some to be the first influential English grammarian, decided to ban them in his 1762 Short Introduction to English Grammar, using rationale he described as logical: “two negatives in English destroy one another, or are equivalent to an affirmative — in English, that is to say, just as in mathematics.”

It seem quite obvious, however, language is not math, and in many languages including most in the Romance family, double negatives are actually required. Ultimately, it’s unclear why Lowth was so tenacious in his desire to treat language like math, but he was more successful than the others on this list: double negatives are still frowned upon in formal English, though they do live on in the casual speech of some dialects, as well as in many pop songs.

4. Don’t start a sentence with a conjunction

This one is a real head-scratcher, because it seemed to have evolved apropos of nothing. Not even the likes of Robert Lowth, Henry Alford, or even the bitter John Dryden took issue with using conjunctions like “and” or “but” to begin sentences; even formal and academic writers have been doing so for centuries. 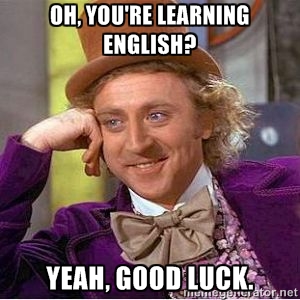 This complete lack of historical or grammatical basis is quite puzzling, so the next time one of your friends corrects you for starting a sentence with a conjunction, ask him to explain why it’s wrong to do so, and watch him squirm. Then consider finding less boring friends who care about more important things.

Ultimately, grammar is living and constantly evolving construction, and I say it’s time to drop the arbitrary, century-old rules proposed by fanciful grammarians with nothing better to do. And anybody who’s not liking nothing I’m saying should try to really analyze where they’re getting their information from.

So if that above sentence makes you cringe, take a deep breath; your English teacher can’t surprise you with a pop quiz in real life. Learning English is already hard enough, so give yourself a break, and stop worrying about arbitrary rules as gleefully as you start sentences with conjunctions.