The Political History of ‘Progressive’

‘Progressive’ is a word that’s been thrown around a lot as of late, especially when it comes to presidential hopefuls. Are they too progressive? Not progressive enough? Or, heaven forbid, headed in the opposite direction altogether and becoming regressive? The word ‘progressive’ was brought up pretty consistently during the race between Bernie Sanders and Hillary Clinton for the Democratic nomination, but it still has people puzzled. Apparently it’s not as easy to identify a true progressive as we thought, although these days it seems Democrat and progressive tend to go hand in hand.

The Progressive Era was defined by the social changes happening in America in the late 1800s and early 1900s, but above all the intent behind being a ‘progressive’ was to foster a more positive view of the government. The so-called ‘Progressive Presidents’ such as Theodore Roosevelt and Woodrow Wilson targeted corruption in politics, denouncing the power big bosses had over politicians as against the sort of progress the American government hoped to achieve. But being a progressive didn’t always have positive connotations, even back then. On the one hand, to be progressive meant to support women’s suffrage, better minimum wage, and the elimination of corruption, but on the other progressives were known to throw their weight behind the Prohibition, higher taxes, and eugenics (that is until Hitler made it unpopular).  Progressivism was a slow progression towards better social reform, but still associated with some remarkable pitfalls of the time. Even more interesting, it wasn’t a word claimed exclusively by one political party or another. It didn’t matter if you were Republican or Democrat, progressive views could fit in with your political choices. After all Theodore Roosevelt was a Republican who identified as a progressive, while Woodrow Wilson was a Democrat! 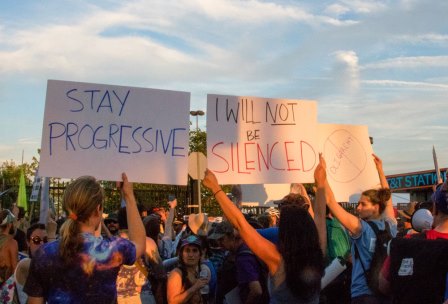 Following Franklin D. Roosevelt’s progressive New Deal in the 1930s, the Democratic party experienced a significant shift to the left and became more progressive than ever before. What exactly does that mean? Well, the Democratic party hasn’t always been the bastion of what it means to be progressive (and some would argue it still isn’t). At its inception, the Democratic party was actually quite conservative in its views and slow to get on board with key movements such as Civil Rights, women’s suffrage, and Native American rights. Today, the tide has turned and it is the standard for Democratic politicians to support gay marriage, a woman’s right to choose, and other social issues of our time. But is that what really defines a progressive in this day and age? After all, Hillary Clinton has criticized Bernie Sanders for having too high a standard of what it means to be a progressive. Apparently if you demand too much social change, no one will be able to meet those standards. This has led some historians to argue that what defines a progressive isn’t so much having forward-thinking, liberal ideas, but rather someone who is successful in implementing these changes. So what really defines a progressive is not only his or her ideas, but whether or not they have the oomph to really push those ideas forward into completion.

So is Bernie Sanders more progressive than Hillary Clinton? Or is it the other way around? Should the definition of ‘progressive’ be narrowed down to only those who get things done or widened to include those who dare to dream? Has progressivism changed all that much? In some cases, no. Bernie Sanders has expressed his admiration for Eugene Debs, a leader during the Progressive Era, while parallels between Hillary Clinton and female activist Jane Addams have also been drawn. In fact, it could be argued that today’s progressive rhetoric is simply an echoing of those who came before. Time may have progressed, but it seems ‘progressive’ hasn’t all that much. And that’s not altogether a bad thing.

How to Practice a Language as an Introvert Read more
See more articles about Culture, Educational, English, Popular Culture