The Language App of the Future: FlashSticks’ Object Translator

Recently, there’s been a lot of buzz about the latest FlashSticks app in the language-learning world. Indeed, in their new app, FlashSticks set out to create something that would’ve seemed impossible even just a few years ago: the world’s first object translator. The idea is simple: you select a language, take a picture of any object, and learn what it’s called in a variety of languages.

Aside from its futuristic sci-fi appeal, such a translator could be very useful when you need to know a foreign-language word in a pinch. At a restaurant in Italy, and don’t know how to order another glass of wine? No problem — just take a picture of your glass, and the answer will appear before your eyes.

But does the app live up to its hype? That’s what we sought to find out. So we downloaded the FlashSticks app, and tested it out on a variety of objects, from the commonplace to the obscure. We were pleasantly surprised to find out that FlashSticks’ new object translator not only lives up to its expectations, but even exceeds them.

Such a high-tech app is a bit surprising coming from FlashSticks, a company known for its low-tech simplicity. Indeed, FlashSticks themselves are post-it notes with a variety of foreign-language vocabulary items, which can be stuck wherever you’d like around the house. We’ve reviewed FlashSticks in the past, and commended the product for its simplicity and utility.

The FlashSticks app has three primary functions. First, you can take pictures of the FlashSticks post-it notes themselves in order to hear them pronounced by a native speaker. This is a useful feature, especially for beginners who aren’t so familiar with the sounds of a foreign language.

Second, the app offers a variety of language-learning activities using digital versions of FlashSticks cards. These activities are centered around a particular vocabulary theme, such as “Food & Drink” or “Friends & Family”. This is especially useful for people who have specific goals; travelers, for instance, will be more interested in the “Holiday & Travel” section, whereas professionals will find the “Work & School” section to be useful.

In total, there are hundreds of vocabulary words in these various categories. Each word comes with lots of useful extras, including a native-speaker pronunciation, an example of the word in context, and important grammar points about the vocabulary item. You can even record yourself and then compare it to a native speaker’s pronunciation to work on your accent. There are also some fun, light games you can play to test your skills. 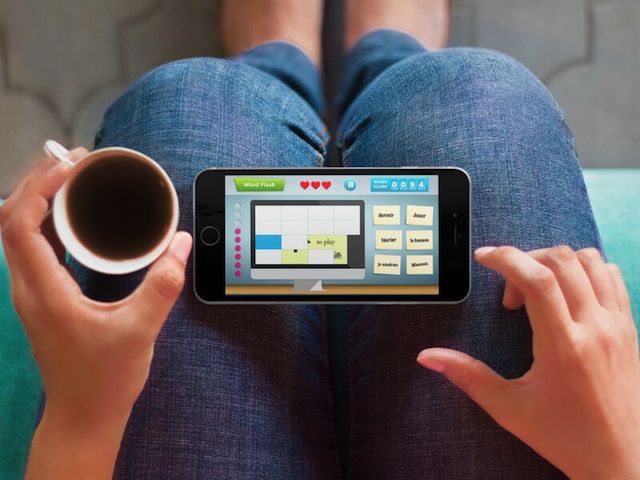 By far the most innovative and exciting part of the FlashSticks app, however, is the object scanner. It works as promised: you simply photograph an object, wait a few seconds, and FlashSticks magically tells you how to say the word in your choice from dozens of languages, from Arabic to Vietnamese.

The most amazing part of the object translator is its specificity. For example, when I took a picture of a pair of scissors, it told me not just how to say “scissors”, but specifically black and silver scissors. Wow! Of course, FlashSticks gives you the option to break up these compound phrases into individual words, so you’ll also learn that “scissors” is simply saks in Norwegian. 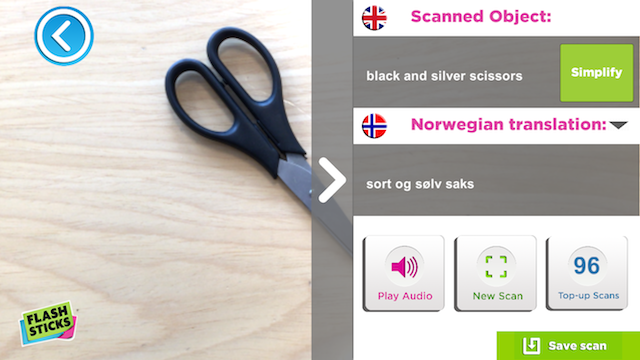 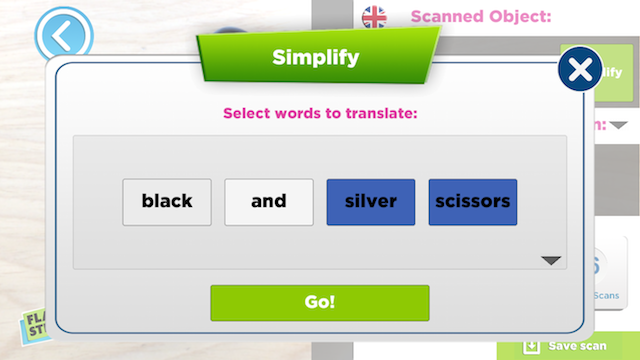 I recommend simplifying your vocabulary as much as possible so as to not overwhelm yourself with relatively uncommon phrases like “stainless steel”. The FlashSticks software, still in its infancy, sometimes struggles a bit in its translations of complex phrases. Still, it gets the basics right, and it’s undeniably a ton of fun to take pictures of random objects — even uncommon ones! — and watch FlashSticks recognize and translate them.

The FlashSticks app is available for free on iPhone and Android, but those with smaller phones should be warned: the interface doesn’t work as well on small screens, and is better suited to larger, higher-resolution displays.

Still, for those with suitable smartphones, the FlashSticks app is as exciting as promised, and comes loaded with a plethora of extras that make it a really useful tool for the language learner. We’d like to think it represents the beginning of a new era in language-learning technology — a bold first step in allowing us to instantaneously translate the world around us.

You can download the FlashSticks app (as well as learn more about FlashSticks) by visiting their website here. The app is free (with in-app purchases available), and it’s excellent both as a cool party trick and a serious asset to the language learner. We highly recommend you give it a download. 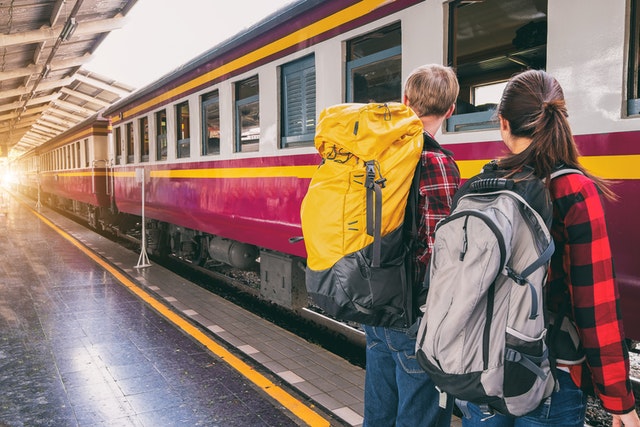