Buenos Aires, the “Paris of South America” is home to many fantastic art galleries. Whether you’re looking to see one of Frida Kahlo’s self-portraits, Rodin’s marble masterpiece ‘The Kiss’, or cutting edge modern art, the city caters to every aficionado’s appetite. Art isn’t however confined to the white walls of hushed showrooms, but illuminates every other building side, wall and public space across the city.

Perhaps Buenos Aires’s most notable art gallery is on its very streets. Far from the ugly tags and hurriedly scribbled messages typically synonymous with the term graffiti, this street art scene boasts giant murals, intricately detailed stencils and vast paste-ups that make the streets ooze with colour and unique character. It’s so prevalent that it confidently and subtly decorates the inner workings of every day life, allowing for adventures in this sprawling city that still surprise. Check out everything you need to know here: 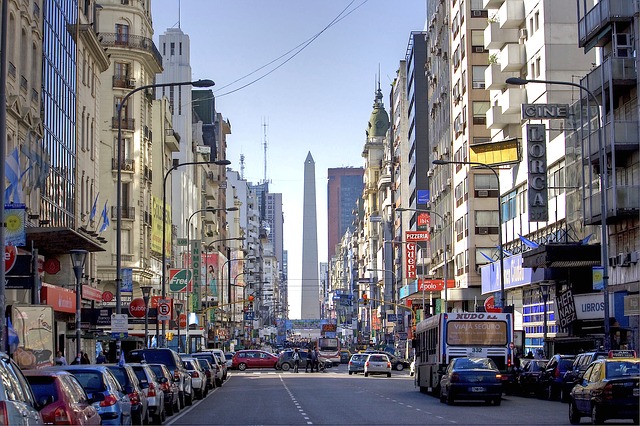 Comprised of many artists born and raised in the city, Buenos Aires street art community is renowned for its close-knit and inclusive feel, where artists learn from and inspire one another. Many of its stars, including Martin Ron who is considered by many to be the Messi of the street art world, have gone on to paint in cities all over the world. Equally, the city has attracted the world’s best street art talent, including Italian artist Blu and Fintan Magee, one of Australia’s most accomplished graffiti artists.

So what is it about Buenos Aires that has seen it become one of the street art capitals of the world? The answer to this question is embedded within the history and culture of the Argentine capital city.

The porteño way of life certainly serves to explain the prominence and popularity of street art in their city. Central to Argentine culture is the act of sharing. Many local customs are rituals of sharing, such as the drinking of mate (a traditional infusion drink shared from the same cup and straw), and the ceremonial gathering of friends and family for an afternoon-long asado (BBQ) almost every weekend. It is therefore no wonder that street art thrives in a culture that places so much importance upon communal activity. Favouring inclusivity and accessibility, Buenos Aires’ streets are a canvas to be enjoyed and shared by all, without the pressures of academic standards or gallery admission fees. 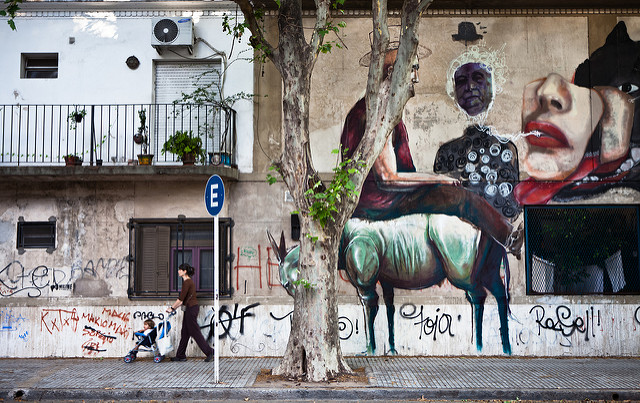 Nonetheless, street art in the capital is more than simply a reflection of local culture, but also deeply connected with the country’s past.

The origins of contemporary graffiti stem from the cities of New York and Philadelphia in the late 1970s. During the advent of hip hop, multiple artists began tagging public spaces in an artistic symbol of defiance and nonconformity considered by many as the visual representation of rap music. The history of Buenos Aires’ street art scene tells quite a different story. Surprisingly, graffitti is a relatively recent phenomenon to the city, not finding its way to Argentine streets until the late 1990s. When it arrived, it wasn’t a product of a burgeoning subculture amongst underprivileged communities, but conversely the import of the Argentine elite wealthy enough to visit New York and take inspiration from the bubble writing scrawled across subway carriages.

As graffiti tags became a regular feature of Buenos Aires’ public spaces, one of the most devastating events in Argentina’s recent history added new meaning to the presence of graffiti in the city. In 1998, a terrible economic crisis shook the country. The peso was massively devalued, inflation skyrocketed, bank accounts were frozen and thousands were left unemployed. As the recession entered its third year in 2001 and riots against the government of President Fernando de la Rúa raged through the city, artists took to the streets, using graffiti as a medium through which to process this national catastrophe. 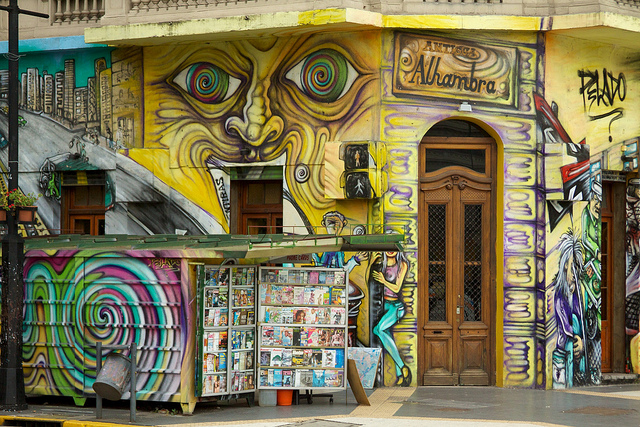 What resulted was a deluge of different methods and styles that significantly amplified the scope of the city’s street art scene. In some cases, art and activism intertwined, with the formation of groups such as Vomito Attack creating politically-charged stencils, posters and spray-painted condemnations of government corruption and contemporary consumerism. Where artists couldn’t afford to buy materials due to inflated prices, they improvised. One of the city’s most famous street artists, Jaz, mixed cheap paint with petrol and industrial emulsion to create a textured, watercolour aesthetic that he still uses today as a symbol of his work’s foundations in hardship.

However, not all of the street art that developed during the economic crisis carried explicit political messages or sought to directly challenge authority. A large reason for its growth in this period was that art carried the potential for escapism. The murals of fantastical characters and vibrant colours seen all over the city today originated from the necessity for big, bright and  beautiful distractions from the collective turmoil faced by porteño’s at this time. Originally a practice borrowed from a foreign city, street art in Buenos Aires now formed its own identity, specific to the experiences and struggles of the Argentine people. 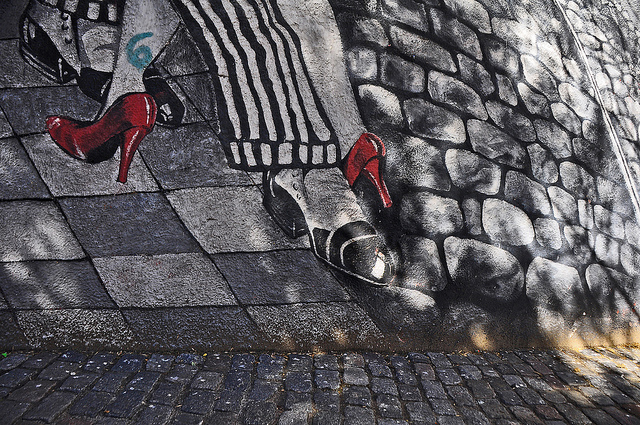 Today, it is the legal leniency of Buenos Aires that sustains the city’s status as a street art hub. Whereas in other countries street artists risk large fines, in Buenos Aires it is a normal to see a policeman stroll past a wall being spray painted without batting an eyelid. All that painters legally require the go-ahead of whoever owns the wall or building, which is usually easily obtained by property-owners looking to deter from their building being subject to less aesthetically-pleasing tagging.

There are multiple ways to enjoy Buenos Aires’ street art scene. Whether you’re a tourist or a local, it’s worth taking advantage of one of the multiple tours and workshops now run all over the city. Or, if you have more time on your hands, take an aimless wander around any of the city’s barrios and you’re sure to come across many of the vibrant stencils and sprawling murals that have placed this prettily painted place firmly on the street art map. 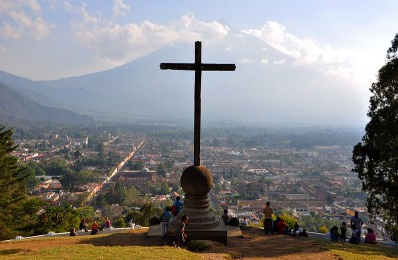