Why Do We Speak Different Languages?

Why are there such a wide variety of foreign languages? Is it due to the Tower of Babble, the cavemen, or true to the Greek mythology tale of Hermes? Will our world always be so linguistically divided?

In the book of Genesis, there is a story about how humanity came to speak more than one language. According to this Biblical account, there was once only a single language spoken amongst humans. However, humanity’s arrogance led them to build the Tower of Babel for which they were duly punished by God and afflicted with confusion of tongues.

Explore our list of engaging language courses in your city or online!

Of course, this isn’t the only legend that strives to give a meaning and origin to why more than 6,000 languages exist today. In Greek mythology, diversity in languages is brought about by the god Hermes and eventually leads to separate nations and discord between countries. Yet another fascinating tale that pervades amongst some African cultures is the one that tells of a terrible famine that led to madness amongst humans. As humanity succumbed to their feverish minds, they began jabbering strange words, hence creating a variety of new languages. 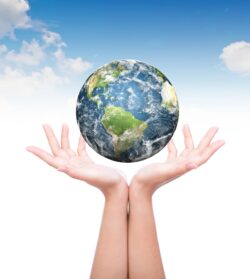 Although old narratives often point to small truths, logically it’s easy to assume that none of these stories are the real reason why human beings don’t speak a single, unified tongue. Scientists claim that mankind’s DNA can be traced back to a single origin, which would imply that at one time we all did speak one language and simply diversified with time. So if we do indeed have the same ‘parents’, why do we have such a wide variety of languages?

According to studies, it’s impossible to trace the birth of language back to its original source. Both linguists and scientists find themselves at a stalemate when trying to explain how language became what it is today. How did our early ancestors suddenly decide that ‘apple’ would be that sweet red fruit and ‘elephant’ would be that big grey animal? How did those at the root of mankind’s family tree solidify certain terms to be used by everyone?

For now, experts are only able to work with theories. One prominent philosophy is that our ancestors needed to agree upon terms in order to communicate with one another regarding everyday life. And let’s face it, if you’re stuck in the same cave with 20 other people for an entire winter, you’d probably find some way, any way, to communicate with one another – or else nothing would ever get done.

But why did different languages develop from there, you may be wondering. Well, travel was a big deal back in the day and humanity spread quite successfully to different parts of the globe at different stages of early history. In this way, isolated by the many miles between them, different groups developed different words for the same things or came up with terms for new things they’d never seen before previously. And so the echelons of modern language were born. 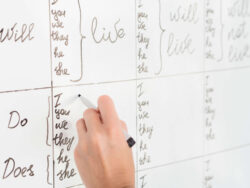 Apart from the social need to develop languages, some experts also believe that our brains could simply be hardwired for language, making the development of languages a more natural process. A Northeastern University study revealed that humans, from infants to adults, all react differently to certain syllables. According to the research, individual brains are sensitive to language universals, meaning that syllables that are frequent across languages as opposed to those which are infrequent tend to be accepted more easily. And so, experts believe that “[t]his result opens up the possibility that human brains share common linguistic restrictions on the sound pattern of language.”

Understanding how your mother tongue developed is a vital part of your own personal history as a part of the makeup of mankind. Some would even argue that we are returning to our roots in that someday all of us will speak a single, global language.

Of course, like the theories that linguists and scientists have come up with to explain the origin of different languages, this is also considered, for the time being, mere hearsay; which means that there remain many vital languages that are necessary for you to know in order successfully live abroad or do business on an international scale.

Don’t get left behind in our multilingual modern society, instead sign up for some excellent language classes. Keep your skills sharp with free online placement tests and you’ll be ready to take on a world full of diverse and fascinating tongues!

Explore our list of engaging language courses in your city or online!