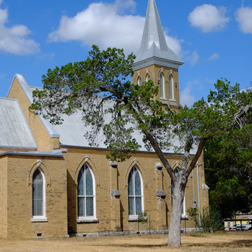 Originally founded around 1843, Schertz quickly grew from a small town of farm families to a fast-paced cotton producer. As the local economy continued to grow so did the connections to the national and global economy as the Galveston, Harrisburg, and San Antonio Railroad was built through the town. The community quickly embraced the new opportunities and has developed into a hub for global commerce. With more manufacturers continuing to target the Schertz area, the demand for workers with foreign language skills has risen drastically. In order to capitalize on this trend, begin learning a new language today with the help of a qualified, native speaking teacher from Language Trainers. All lessons and courses are molded to each student and taught at the pace that works best for you. By using our free online language tests, you can test your foreign language level, or you can get started today by contacting us about creating a custom-made course.

Sign up for our Italian lessons in Schertz today! Schedule your lessons whenever you want them, so you can always find time to study, regardless of your timetable or location. You don’t even have to leave home to meet your teacher!

1-on-1 General Italian Course in Schertz

Our general one-on-one courses in Schertz will help students improve their Italian level quickly and efficiently, whatever their needs. One of the most exciting aspects of our courses is that they are developed entirely around the needs of the students. The fact that we offer our Italian classes on a One-on-One basis means that you can learn the words and phrases you need in a comfortable and relaxed environment.

1-on-1 Business Italian Course in Schertz

Our Italian courses in Schertz are taught on a one-on-one basis and will help you improve your business communication skills immensely. No matter what level you begin at we will soon have you dealing with business introductions comfortably before moving onto other matters. Beginner level students can expect to finish the course with basic telephone Italian and email skills, as well as a level of survival Italian, granting them the ability to work in a country where Italian is the native tongue.

11649
people have taken our
Italian level test.
1
language teachers in Schertz
are already registered with Language Trainers.
Start Learning
“”Our instructor helps us immensely in understanding and overcoming so many of the nuances that are present in the Italian language.””
Steve Meyer
Italian course in Las Vegas
“”Piero has been a great fit for our Italian classes. My personal experience with him has been outstanding. He is very flexible and easy to communicate with.””
Daisy Galo
Italian course in Denver