Of Linguists and Lepidopterists

It’s difficult enough trying to learn a second language—it can take years, even a lifetime, for the most dedicated of us. But shockingly, some of the English language’s greatest writers are composing their signature works in a language different from their mother tongue. Approaching the literary scene as outsiders, these writers paradoxically display the most meticulous understanding of English grammar and syntax, as well as a deep insight into the cultures of English-speaking countries.

Vladimir Nabokov is one of these literary greats, a Russian expatriate lepidopterist most famous for his novel Lolita. Trilingual in Russian, French, and English since he was young, Nabokov worked as a writer, translator, and English professor in Europe and America. His writing style is characterized by effortlessly precise prose and a love of wordplay.

Nabokov had a fondness for wordplay…and butterflies

In particular, Nabokov enjoyed anagrams, (“Vivian Darkbloom,” an anagram for “Vladimir Nabokov” is a recurring character in various novels); and alliteration, as in the infamous opening line, “Lolita, Lolita! Light of my life!” His short story “The Vane Sisters” even includes an acrostic final paragraph, in which the first letter of each word spells out a secret message. In fact, one of the most common criticisms of Nabokov’s writing is that he pays too much attention to detail and aesthetic language, rather than focusing on character development. 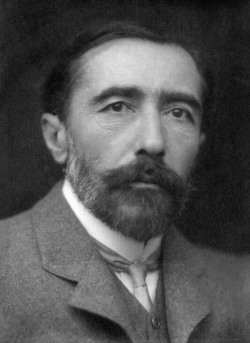 Joseph Conrad, a Polish writer/seafarer who didn’t achieve fluency in English until his 20s, (and whom Nabokov always felt insulted to be compared to), is known for his swath of classic novels such as Heart of Darkness and Lord Jim. Influenced greatly as a child by Polish Romantic poets, Conrad infused the literature of the late-Victorian British Empire with his sense of Slavic tragedy and melancholy. And, as a national from a country that had for much of its history been conquered by surrounding powers, Conrad wrote of the horrors of colonialism at a time when much of Europe was still celebrating the “White Man’s Burden.”

Like Nabokov, Conrad’s language was so precise and evocative that he has been described as a “prose-poet.” He introduced aspects of Polish and French into his written grammar and vocabulary in a way that has influenced generations of subsequent writers.

While there are plenty who choose to write in non-English second languages—Irish Nobel winner Samuel Beckett wrote in both English and French, and Czech novelist Milan Kundera wrote and translated in Czech and French—the list of international writers who favor English is extensive—Anaïs Nin, Maxine Hong Kingston, Chinua Achebe, Kazuo Ishiguro, and Kyoko Mori are just a few. So the question is: why?

Conrad described himself as not wanting to denigrate the greats of Polish literature by presuming to add himself to them, whereas to write in French required a degree of artistry. “English,” he claimed, “Is so plastic—if you haven’t got a word you need you can make it.” However, for most contemporary writers, it’s simply a matter of economics: English being the “universal language,” the market for English literature is larger than most western markets.

For a newcomer to the literary world, the motivation to write a bestseller in English and then have it translated to your native language is stronger than attempting to do it the other way around. So if you speak English and envisage writing the next Harry Potter, you can rest easy—half of your work is already done!

If you’d like to write the next great bestseller but are afraid that your English is not up to par, don’t fret! You can always contact us, and we’ll organize a tailor-made course for you with one of our professional native-speaking teachers.